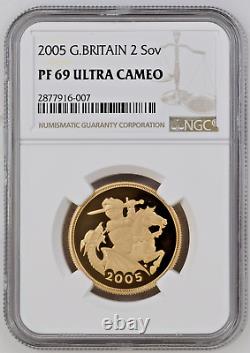 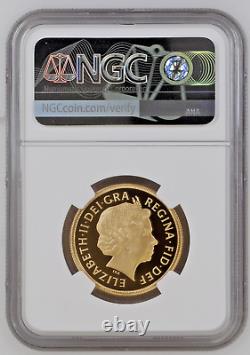 Struck for one year only. In 2005 The Royal Mint introduced a modern interpretation of St George and the dragon for the reverse of The Sovereign, designed by Timothy Noad. The largest coin yet seen in England, both in size and value, it was given the name Sovereign. A powerful political statement, it was struck in turn by each of the Tudor monarchs until the reign of James I, before disappearing for 200 years.

In 1817, The Sovereign was revived as part of the great coinage reform that followed the end of the Napoleonic Wars. Although only about half the size of the original, the new coin more than matched the beauty of its predecessor. The traditional heraldic reverse was abandoned in favour of St George and the dragon by the Italian engraver Benedetto Pistrucci - a numismatic classic that has become synonymous with The Sovereign and endures to the present day. The financial demands of the First World War brought about the end of The Sovereign as a circulating coin. Today it survives as a bullion and commemorative coin - one of the world's oldest coins still in production. Every example of the'chief coin of the world' is testament to uncompromising standards and unrivalled accuracy - the pinnacle of minting excellence. This item is in the category "Coins & Paper Money\Bullion\Gold\Coins".