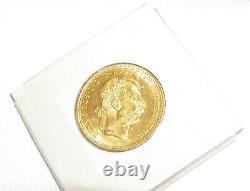 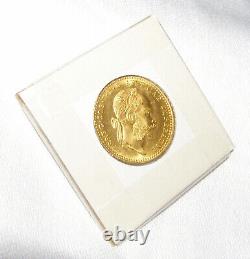 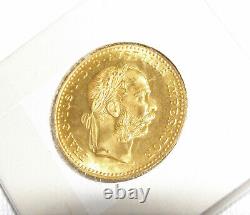 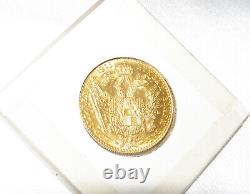 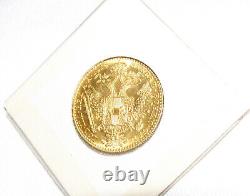 It is 3.49 grams, 0.1106 oz. This 1915 one ducat coin features the laureate head, facing right, of Emperor Franz Joseph I, as well as the inscriptions "FRANC IOS I D G AUSTRIAE IMPERATOR" on the obverse side.

The reverse design shows the arms of Austria superimposed upon a crowned double-headed Imperial eagle and the inscriptions HUNGAR BOHEM GAL LOD ILL REX A 1915. Austrian re-strike ducats are high in gold purity and exhibit excellent craftsmanship. They were produced in large numbers, and are considered bullion issues. They do not really have any numismatic value. Background History: Gold ducats were first issued by the Kingdom of Austria in the early 17th century.

The ducat is a gold coin that was traded throughout Europe from the 12th century until World War I. Most European countries used ducats, including the Netherlands, Russia, Sweden, and Austria. In 1284, the first gold ducat, also called zecchino d'oro (Italian for "gold sequin"), was struck in Venice.

Ducats became a standard gold coin throughout Europe, especially after they were officially imperially sanctioned in 1566. Ducats were struck in high purity gold, 23 3/4 carats, making them one of the purest gold coins ever produced for circulation.

The first ducats issued by Austria were produced in 1612 and probably earlier. The Austrian Mint ceased issuing ducat coins in 1914 during the last years of Franz Joseph I, emperor of the Austro-Hungarian Empire.

One and 4-ducat coins issued 1915 are still being produced by the Austrian Mint as official re-strikes. It is important to note that none of the 1915 dated ducats were actually struck in 1915. All of the 1915 re-strikes (of which 996,721 were struck between 1920 and 1936) are worth their weight in gold; thus, they are considered a bullion rather than a numismatic coin.

Grading is a subjective art and does vary between individuals and experts alike. We provide the best quality images that we can. Based on these images, and your own level of experience, you should assign your own grade and valuation.

As color monitors vary from computer to computer, please ask questions if this is an issue for you. INTERNATIONAL BUYERS - Please Note. This item is in the category "Coins & Paper Money\Bullion\Gold\Coins". The seller is "cotedurhone" and is located in this country: US. This item can be shipped worldwide.