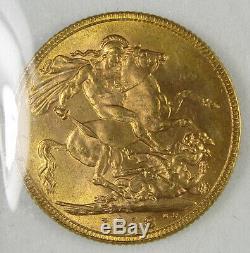 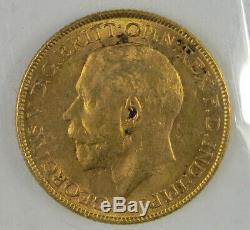 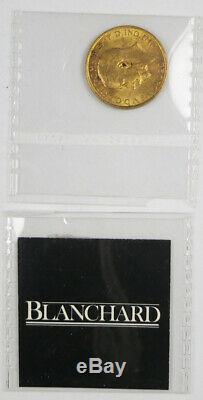 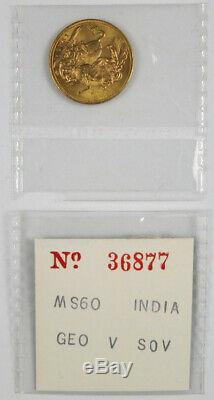 INFO: This gold coin (22.05 mm diameter with milled edge) featuring the effigy of King George V facing left; around, GEORGIVS V D. BRITT: OMN: REX F:D: IND: IMP. George on horseback holding a short sword in his right hand, the horse rearing to right over a fallen dragon which has a broken lance in its chest; in exergue, the date, 1918 and the artist's initials B. The mint mark ('I' for India) is in the ground above the middle of the date.

This was the first and only issue of pre-decimal sovereign coins in India. Indian gold coin was not legal tender.

In 1864 the Indian government authorised the acceptance of Imperial sovereigns and half-sovereigns in payments to the Treasury at the rate of 10 and 5 rupees respectively but the coins were not made legal tender. From 1871 Sydney produced Imperial types both St. George and Shield reverses as did the new mint at Melbourne from 1872. From the 1870s there was an expectation that the mohur coinage would be replaced by sovereigns, to the extent that coining mohurs ceased for a time from 1891. In 1899, the year that the Perth Branch of the Royal mint began production of sovereigns, Imperial gold sovereigns were declared legal tender alongside the silver rupee and it was decided that a mint would be established in Bombay to strike sovereigns. For a mint outside Britain to produce the sovereign it had to be a Branch of the Royal Mint. Building work on the new mint was begun but the concept was abandoned in 1903.

The issues of paper were backed by gold bullion and a variety of gold coin. To simplify matters it was decided that this gold should be coined into sovereigns. An area of the Bombay Mint was set aside and isolated from other mint activities and was proclaimed a branch of the Royal Mint. Dies were provided for sovereigns from London (as was the case for all branch mints) and production began on 15 August 1918.

The plastic fold is separated. The photos display exactly what you will receive please note that lighting, cameras, computer may alter the color in photography. Also, your screen may also alter the color/appearance as well. Please feel free to ask any questions.

Your request will be denied. NOTE: I ALWAYS use special attention towards packaging.

Please contact me if a return is required. Thank you for viewing this 1918-I Great Britain Full Sovereign Gold George V India. I accept full responsibility for the content of this listing and the item(s) offered. The item "1918-I Gold Full Sovereign, George V Bombay, India Mint 7.988 Grams" is in sale since Sunday, March 1, 2020. This item is in the category "Coins & Paper Money\Coins\ World\Gold". The seller is "byte1bit1" and is located in Palm Springs, California. This item can be shipped to United States.